Geoff Hodge and Phil Davies discuss the benefits and challenges of digitalization plus the importance of leadership and why simplicity is a key factor in a successful digital transformation. Article based on a webinar broadcast, November 2019

Digitalisation in fund management centres on making funds self-aware. This has not happened outside of individual enterprises yet, but a Funds Europe webinar in association with Milestone Group discusses digital transformation’s next stage.

Digital transformation in asset management is sometimes described as glacial but in the past year, the notable adoption of blockchain suggests the pace is picking up speed. The appointment of chief digital officers is more common in the funds industry now and even artificial intelligence (AI) initiatives have been launched.

Geoff Hodge, executive chairman of fund management fintech firm Milestone Group, says the industry’s vision for ‘digitalisation’ should be to expand from the notion of shunting data around to encompass the delivery of processes that span corporate boundaries.

End-to-end process management would enable the whole funds industry to scale up and create a new ecosystem, rather than just the firms themselves.

‘Digitalisation’ refers to how business processes can be fundamentally improved through digital technology. It’s different from ‘digitisation’, which is a simpler task of dematerialising non-digital data into a digital format.

Operating beyond capability
Most organisations have similar operating models: a core platform is surrounded by best-of-breed systems and these are surrounded still further by spreadsheets.

It’s complex. Milestone analysis has found that 40%-50% of firms’ back and middle-office effort is expended on managing the movement of data between these different systems, which creates some 70% of operational risks.

Core platforms do hold up relatively well in terms of performing the functions they were originally designed for - fund accounting, for example. But the problem, says Hodge, is that systems are also being required to perform tasks beyond their capability.

Core platforms will take time to replace, and firms should realise there are opportunities to apply digital technology to areas such as production and data management to complement legacy technologies that can remain effective for some time.

A good digitalisation strategy also recognises that end-to-end processing is not just a journey of discovery, it is a production line – an engineering exercise that should be done once and optimised from time to time and does not require modelling tools to be in the hands of every operator on that platform,” says Hodge.

In a poll of the webinar audience, the majority (55%) described digitalisation as fundamental for maintaining a competitive business. None viewed digitalisation, which can be an onerous process, as a distraction or an irrelevance.

This, says Hodge, is in line with what he sees in the market day-to-day. “There is increased emphasis on fundamental transformation to improve performance rather than routine and incremental changes that has taken place in the past.”

Most organisations that have added technology organically over the years have created a brittle infrastructure and this is especially the case in more recent times as digital technology has been wired in.

Robotic process automation, business process management and workflow have all imposed operating models in a top-down way across infrastructures. The problem now facing firms is managing operational complexity that has resulted from this and dealing with a lack of flexibility and scalability.

Leadership and simplicity
Leadership is a key condition necessary for successful digitalisation, Hodge says. “The CEO and leadership team need to be behind the strategy because it touches every part of an organisation.”

But simplicity is also a key factor in successful digital transformation, says Phil Davies, Milestone’s chief technology officer. “We all want to create the flexibility and scalability we crave. To do this, we must make our systems progressively simpler, not more complex.”

By analogy, he says, autonomous cars are not viewed by designers like trains on tracks that operate within complex signalling systems. “It is because the car can be given enough intelligence to be self-aware and autonomous. In a true autonomous vehicle world, traffic lights won’t be required.”

Davies adds: “Without due care, we are in danger of compounding the current problems and not creating the radical step-change we are expecting.”

Analogous in asset management to the car is the fund, replete with its moving parts such as portfolios and share classes. If the focus for the digitalisation process is the entity rather than the user – the car rather than the driver, the fund rather than the administrators, accountants, etc - then it becomes easier to see the benefits of digital. Digitalisation makes the fund self-aware and autonomous. It ‘knows’ what processes to execute and which data is needed, and so fund processing becomes “fund-entity centric”.

The complexity in the funds industry is found in fund structures, asset allocation methodologies, fee calculations and reconciliations across different business lines and beyond corporate boundaries.

“We are seeking to contain this business logic to manageable chunks and to allocate to responsible entities,” says Davies. “The simplicity comes from standardisation of processes and ensuring that asset allocation, NAV calculation and income distribution all derive from the same operational backbone and share the same structure as any other process.”

This requires the fund to know its surroundings (investors, investments, and specific business logic required to execute various functions). The fund then becomes an anchor point for new digital technologies and an environment in which machine learning and AI can be deployed more safely.

Davies says: “Don’t pay too much attention to digital technologies as an end in themselves. Instead focus on tangible measures of operational outcomes against your peers and internal benchmarks.”

He adds: “Don’t digitalise silos. Have an agile philosophy and create an environment into which those technologies can be safely deployed. That way, you can get true digital transformation rather than just implementing digital technologies.”

Hodge says: “There is some degree of subjectivity in what constitutes digitalisation and digital transformation, but ultimately we feel organisations should focus on a structured journey which reveals various opportunities as you progress.”

Despite the benefits of digital transformation, change will be a challenge for small and medium-sized firms. But Hodge predicts innovations that could emerge from this include not just partnerships between investment firms and fintechs, but even pre-fabricated solutions that can be shared.

Geoff Hodge and Phil Davies took part in a Funds Europe webinar in November, sponsored by Milestone Group. The ‘Using digitalisation to drive transformation in investment management’ webinar is available for replay at www.funds-europe.com/webinars-channel. 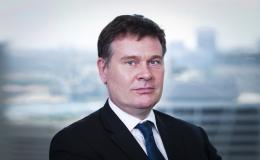